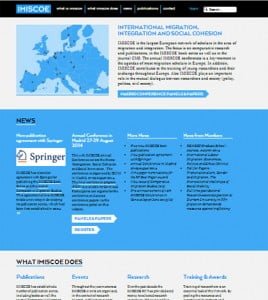 Despite the increasing numbers of South-South migrations, the European Union is still one of the main recipient areas when it comes to third-country nationals. This largely explains why the EU has admitted the importance of matters related to immigration: if such matters are not dealt with in an adequate way, social peace in the middle and long term is impossible. In a context of economic crisis, matters such as social cohesion and social innovation are of utmost importance when it comes to immigration.
Integration and assimilation are terms that immediately call one’s attention when talking about social cohesion. Both terms go beyond the academic conceptions and policy models accounted for in different host societies. They even go one step ahead of results provided by indicators used to measure how immigrants have developed their capacity to adapt to their host society. Instead, social cohesion is two-fold: it requires not only immigrants but also local people and institutions to build up the necessary efforts to bring about positive social change.
These efforts and hand-in-hand work are the basis of social innovation. They require the development of new techniques and pioneer concepts in order to adapt to changes in society; they require efforts to deal with phenomena derived from migration itself, such as transnationalism, naturalization, irregularity, vulnerability, participation, diversity management, identity and acculturation. Walking the necessary steps in order to achieve local and foreign being merged into a united society increases the resilience of both parties, given that these innovative social developments are actually cohesion techniques. All in all, social cohesion is increased via social innovation.
This been said, the importance of Spain should be highlighted when it comes to immigration. As one of the main EU external borders, it is not only a final destination country, but also transit channel to other EU countries. The severe economic crisis and the lack of experience as far as immigrant integration policies are concerned, make Spain and its capital, Madrid, the perfect meeting point for this year’s IMISCOE Conferences. In a country where immigration fluxes have derived into what has been classified as an emergency by the Ministry of Internal Affairs, special attention needs to be paid to immigration issues.
Subsequently, there are several questions that arise when dealing with such matters. In first instance, we are obliged to ask ourselves whether the current context of economic crises in Europe should be used as an opportunity rather than an excuse in order to promote social cohesion. Secondly, we need to consider what experience has taught us and whether we have enough experience regarding migrant tradition and its relation to reception, insertion and full adaptation and integration of immigrants. In this sense, general conclusions should be drawn from IMISCOE 2014 in order to point out best practices that every country should aim for.